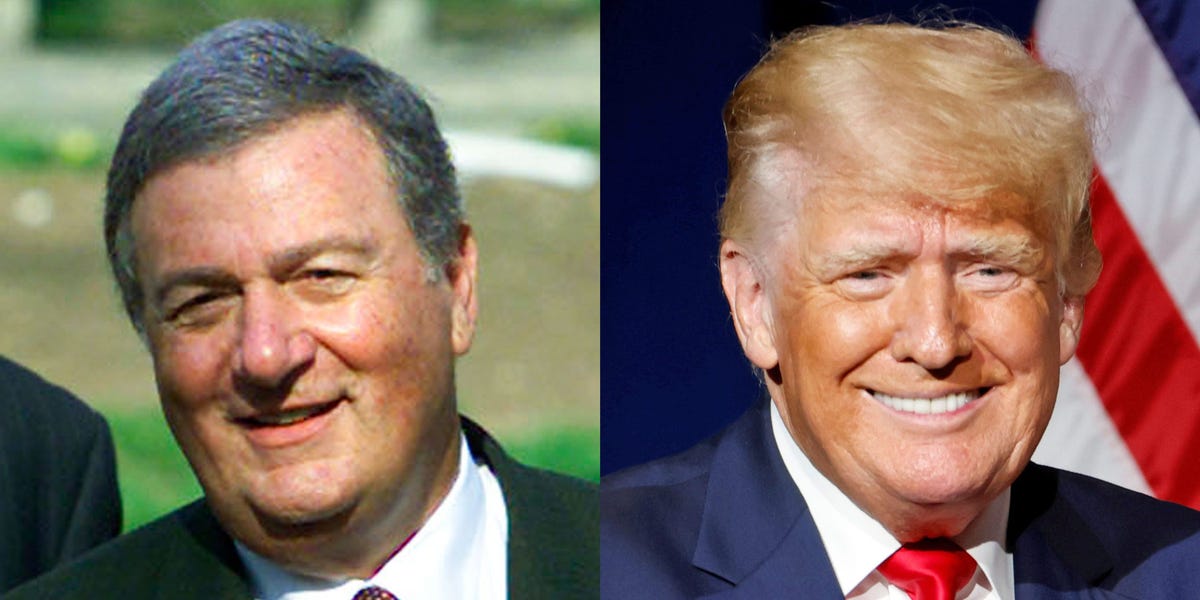 As the Manhattan District Attorney’s office sunk its teeth into the Trump Organization this spring, the former president hired a new lawyer.

Ronald Fischetti, an 85-year-old white collar, criminal defense attorney, was the perfect person to represent Donald Trump in an investigation that’s been approaching his company as if it were an organized crime operation, given his experience representing public officials facing corruption charges and high-profile mobsters.

Fischetti also had another likely selling point: He is a former close colleague of Mark Pomerantz, the prosecutor overseeing the case.

Before Fischetti was the name behind law firm Fischetti & Malgieri LLP, he was partner in the firms Fischetti, Feigus & Pomerantz and Fischetti, Pomerantz, & Russo LLP.

Pomerantz joined Manhattan District Attorney Cyrus Vance Jr.’s team in February. On leave from the elite law firm Paul, Weiss, he immediately brought a new gravity to the investigation, which has been looking into the Trump Organization’s finances for more than a year.

Pomerantz also served several stints in high-profile positions at the US Justice Department that involved prosecuting mobsters and white collar criminals. At one point during the Obama administration, he was reportedly under consideration for the US attorney position in Manhattan.

In fact, when news broke that Pomerantz joined the DA’s team, Fischetti was among the first to sing his praises.

“I’ve been trying cases for a long time,” Fischetti told the New York Law Journal at the time. “He’s the best lawyer I’ve ever worked with or against.”

A dean of the criminal defense bar

Fischetti spent much of the late 1960s and 1970s in politics, working as an aide for Democratic officials and unsuccessfully running for Congress on an anti-Vietnam War platform.

With a law degree from St. John’s University, he switched careers to criminal law, where he quickly rose to prominence. Fischetti mainly represented mobsters and crime families in the 1980s and early 1990s.

Nicholas Gravante, the attorney representing Trump Organization COO Matthew Calamari, described Fischetti as among the most skilled defense attorneys of the era — and someone who resisted cutting deals with prosecutors to avoid trials.

“At one point, he was law partners with my former mentor, Jerry Shargel, and the late James LaRossa,” Gravante told Insider. “Ron is a very experienced criminal defense lawyer and the three of them, Fischetti, LaRossa and Shargel, were the deans of the criminal defense bar — who actually took cases to trial.”

Fischetti’s most prominent case was his defense of Gambino mobster Gene Gotti, who was sentenced to 50 years in prison.

“When they say to somebody, as an example, ‘if he does that again, I’ll kill him,’ they don’t mean that they will physically kill him,” Fischetti once told the New York Times of his defense strategy. “It’s a manner of speech.”

At around the same time, Fischetti and Pomerantz’s firm participated in a failed effort to overturn an anti-money-laundering law that forces law firms to give information about their clients to the IRS.

In the early 2000s, Fischetti grabbed headlines again while representing a former NYPD officer, Charles Schwarz, in a case where Schwarz and a partner were accused of torturing a Haitian man, Abner Louima, and telling him it was “Giuliani time.”

A jury found Schwarz guilty of violating Louima’s civil rights and obstructing justice, but an appeals court overturned the conviction — though Schwarz was later sentenced for committing perjury in testimony related to the case.

He has also represented other politicians. Fischetti represented South Carolina state Senator Gene Carmichael, sentenced in 1982 to ten years in prison for a scheme that involved buying votes. And he successfully reversed a corruption conviction against the former US Congressman Robert Garcia and his wife.

Fischetti has also lectured at Harvard, Yale, Cardozo, Fordham, and New York University law schools, according to a biography on his law firm’s website.

‘He has a lot of credibility’

Fischetti’s long relationship with the 70-year-old Pomerantz has served as an asset in handling the investigation. The two can speak to each other with mutual respect and trust, Gravante said.

“I think he’s perfectly suited for his role in this case,” Gravante said. “He’s extremely experienced and respected. He has a lot of credibility, especially with Mark Pomerantz.”

Fischetti has belittled the Trump Organization investigation in public statements. Before prosecutors formally accused the company and its CFO, Allen Weisselberg, of tax evasion in early July, Fischetti described the case as “much ado about nothing.” Weisselberg and lawyers for the company pleaded not guilty to the charges.

“In my more than 50 years of practice, never before have I seen a district attorney’s office target a company over employee compensation or fringe benefits,” Fischetti told the New York Times of the charges against Weisselberg.

“This is so small that I can’t believe I’m going to have to try a case like this,” he told Politico.

Trump himself has gone further, disparaging the investigation while appearing to confirm Weisselberg avoided paying taxes. Eric Trump and Donald Trump Jr., who remain executives at the Trump Organization, both mocked the investigation and described it as politically motivated.

While Trump surrounds himself with political loyalists, his attorneys, while usually Republican, aren’t always outwardly partisan. It isn’t clear where Fischetti’s political sympathies lie. He infrequently donates to politicians, but exclusively gives to Democrats, including a $1,000 donation for Hillary Clinton’s 2000 run for US Senate, according to Federal Election Commission records.

And Fischetti has avoided criticizing Pomerantz directly. In the interview he gave with the New York Law Journal in February, before Trump hired him, he had only good things to say.

“There’s nobody better to try a case with than Mark,” he told the Journal. “He doesn’t try to take the upper hand in the courtroom. He’s calm; he’s humorous.”